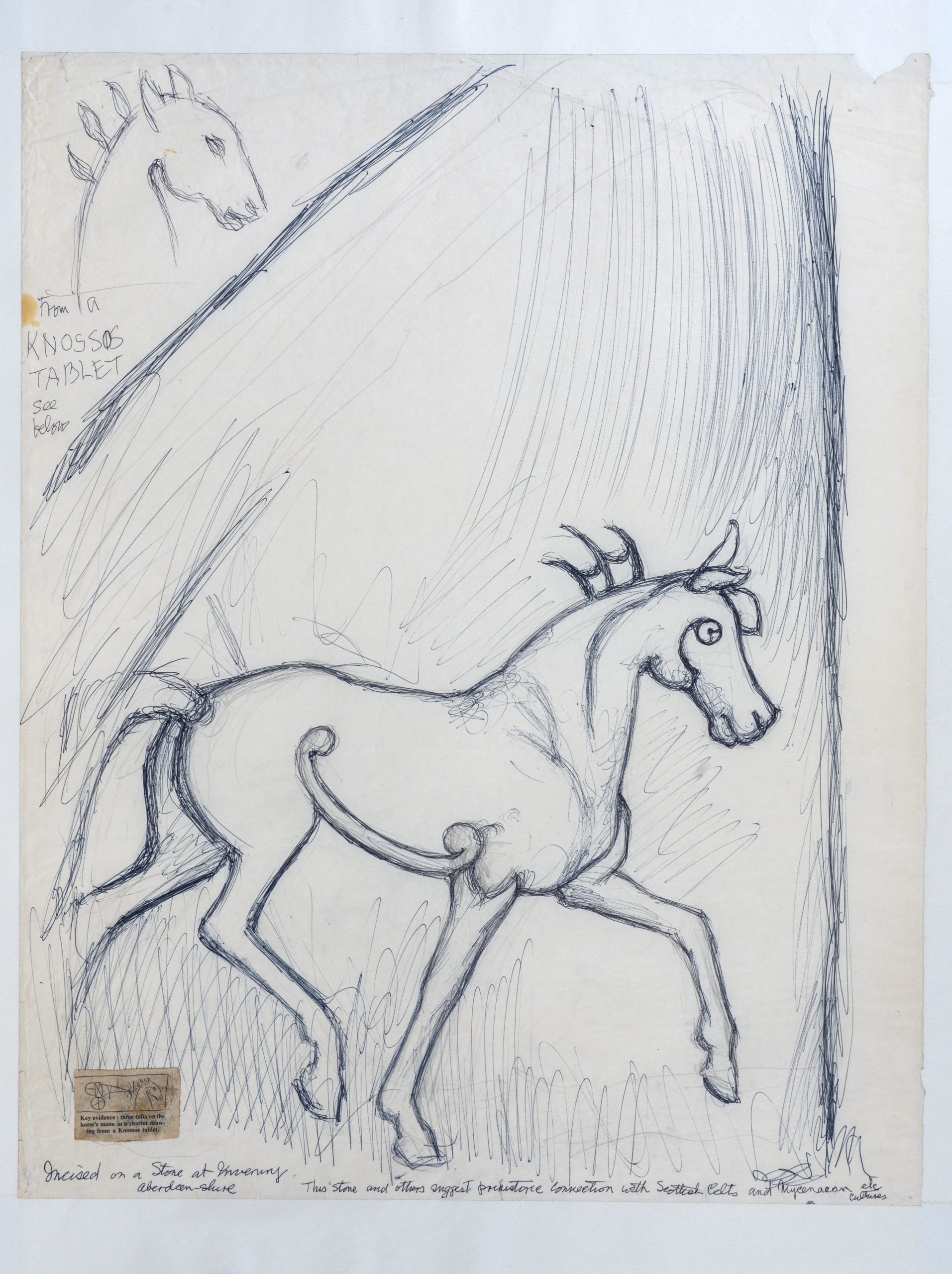 Bain was always looking for connections between the insular art of the British Isles and artistic styles beyond our shores. He knew that elements could be seen in the designs used in Roman, Greek and earlier classical worlds. Here, he seeks to connect the study of a Pictish horse’s head with one from Knossos, Mycenae (in today’s Crete). There are around 2,000 years between the two.

Both are incised into smooth, flat surfaces. One is on a large granite slab, the other a small clay tablet. Both horses seem to have braided manes. Only the horse from Inverurie, Aberdeenshire, has a defined jaw line and muscles. The curved lines enabled the Pictish craftsman to show the horse’s form.

Bain comments that in Celtic art ‘the leg-joints and rib-forms of the animals in ornamental rendering have spiral terminal treatments’. Here, as on other Pictish stones, these spirals are simple scrolls. In the Book of Kells scrolls are also used. Some therefore wonder if a Pictish scribe might have had a hand in the creation of the great book.  Bain was very drawn to the Inverurie slab and used adaptations of the Pictish horse in other designs of his. 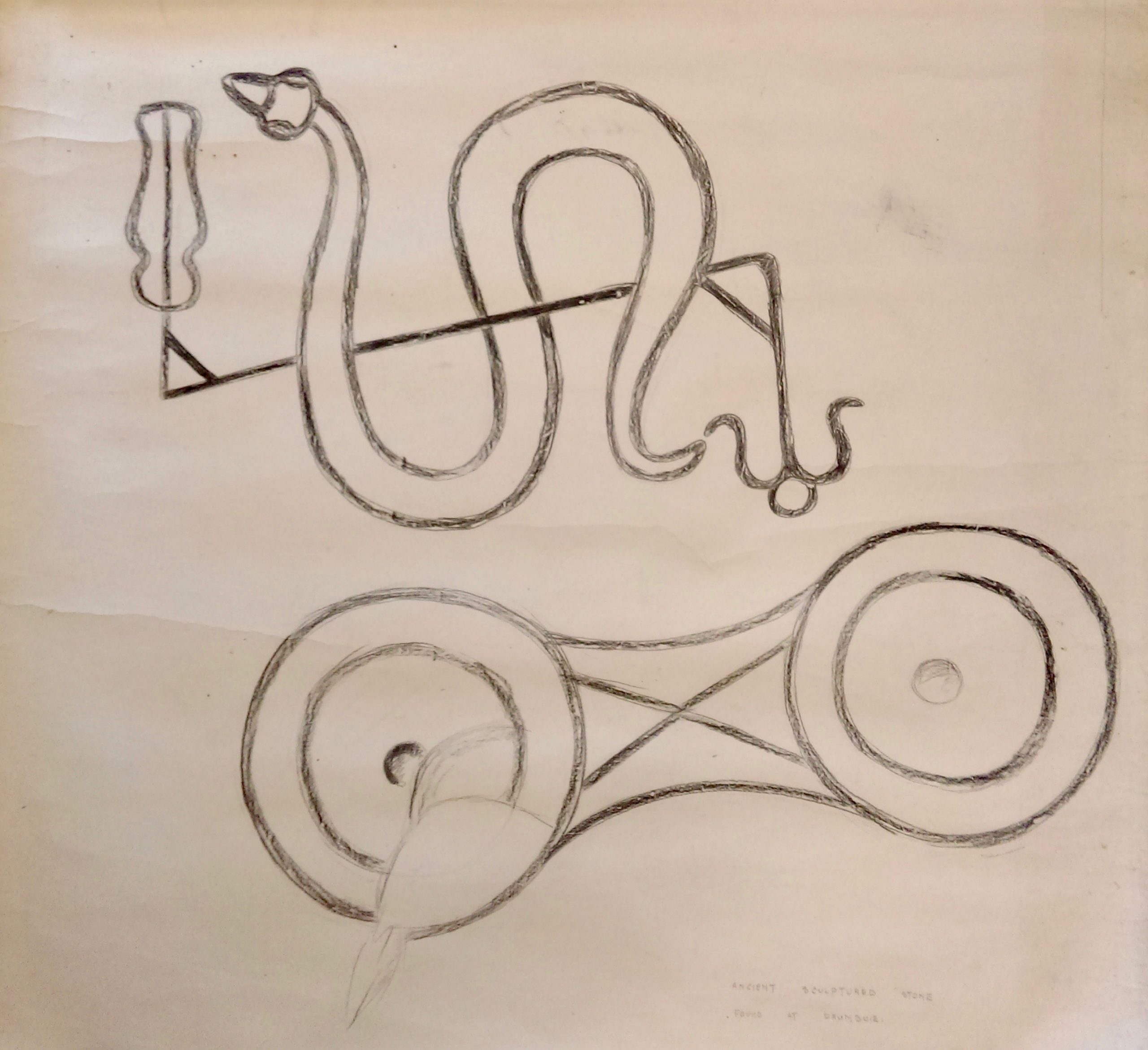 George Bain didn’t draw very many pre-Christian Pictish incised stones. This one, however, has strong family connections. It was found with another Pictish symbol stone on the farm of Drumbuie, by Drumnadrochit, where his wife, Jessie, was brought up.

He may have drawn it while the couple were visiting her family for holidays. At that time both stones were at Balmacaan House, which overlooks the village. Alternatively he drew it when they retired north, to live close to Jessie’s home. Bain clearly had various opportunities to copy these two incised stones. This one has the snake twisted around a Z-rod and the double disc, both regular symbols.

The Pictish stones were found when ploughing land in 1864. The two had formed the covering of a cist, a stone box used over 1,000 years ago for burying the dead. 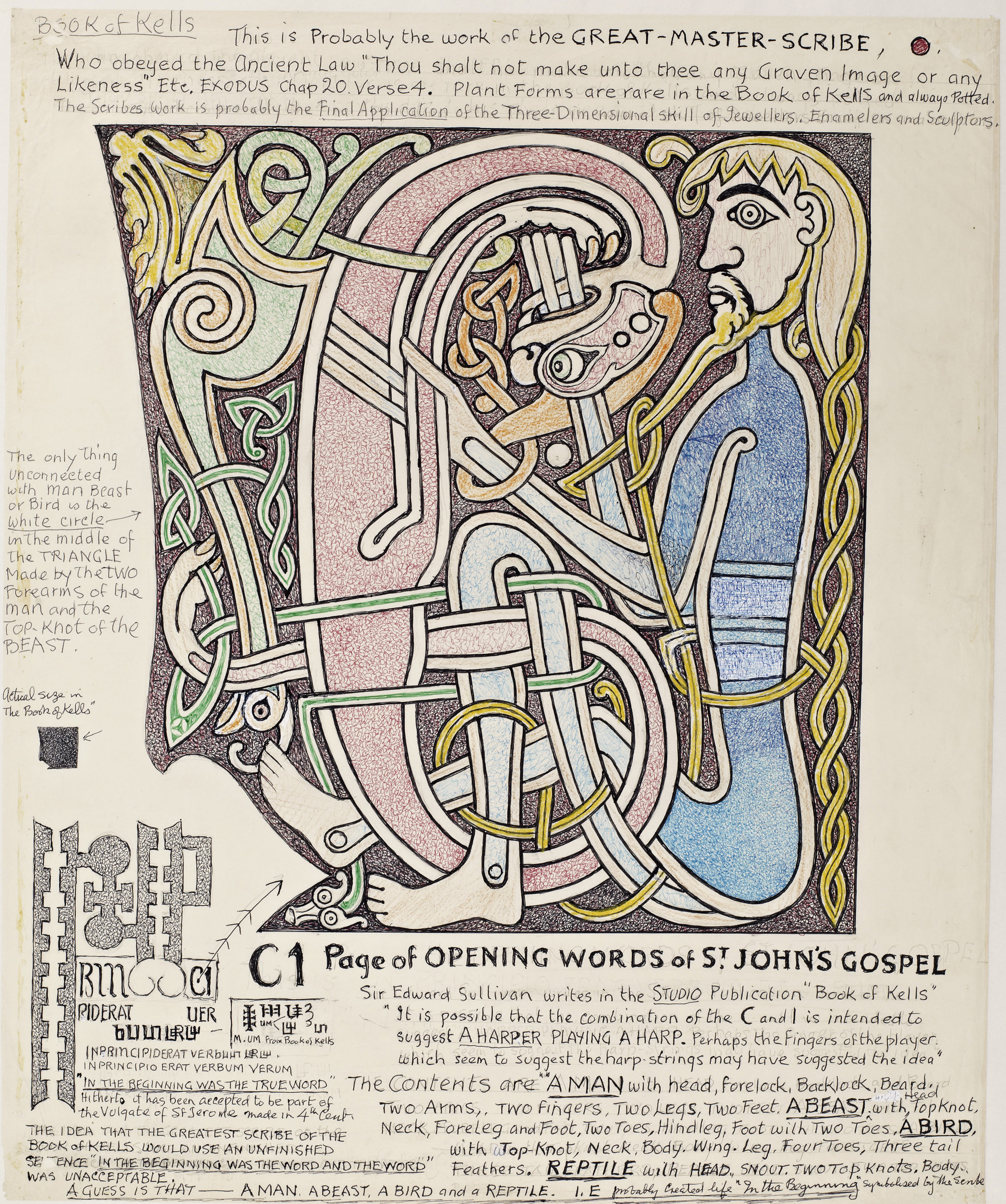 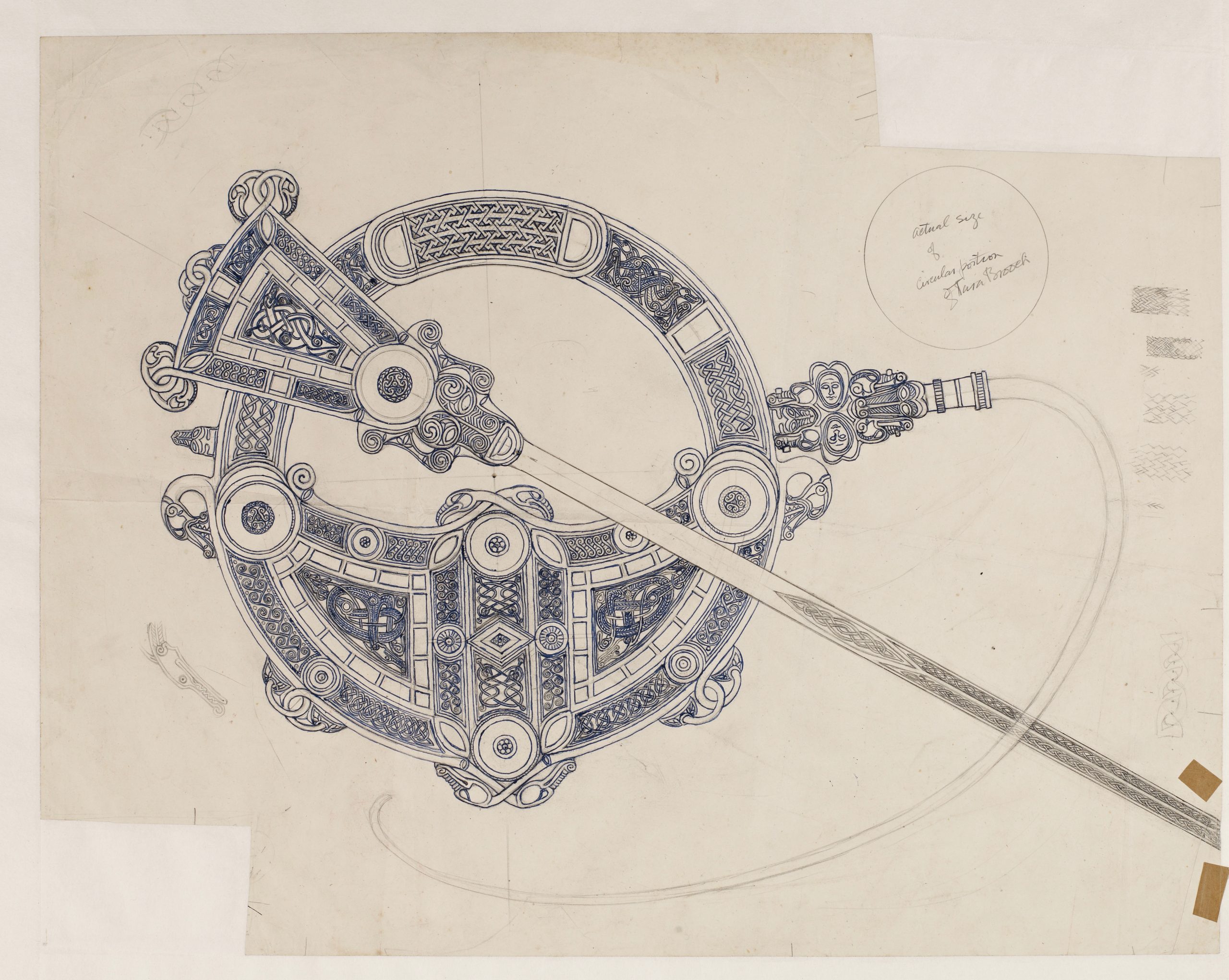 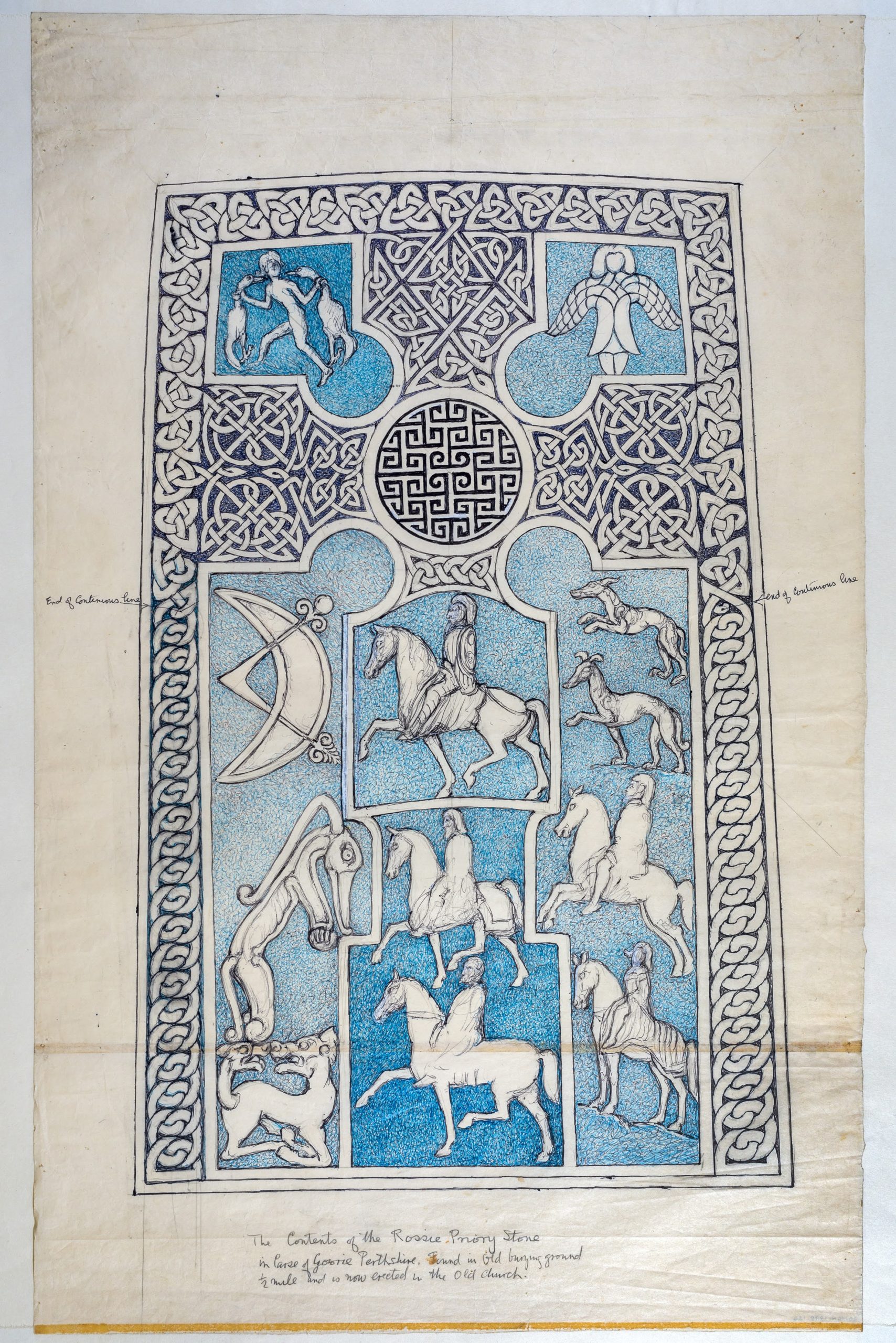 This drawing by Bain seems to follow his initial exploration of the Rossie Priory cross-slab design. He sets out a very detailed, interpretive copy of one side of the Pictish sculptured stone. However, his illustration does have an error. Bain mirrors the knotwork design immediately to the right of the central boss of the cross. In reality the two designs are different.

It seems his attention is once again very focused on the continuous line of the knotwork decoration. HIs notes in the margin emphasise this. So it is incongruous that in its totality the knotwork actually isn’t a single line. Bain points out where the two ends of the line appear on either side of the cross. He would use this ‘feature’ when he came to create a greetings card design based on the cross-slab. 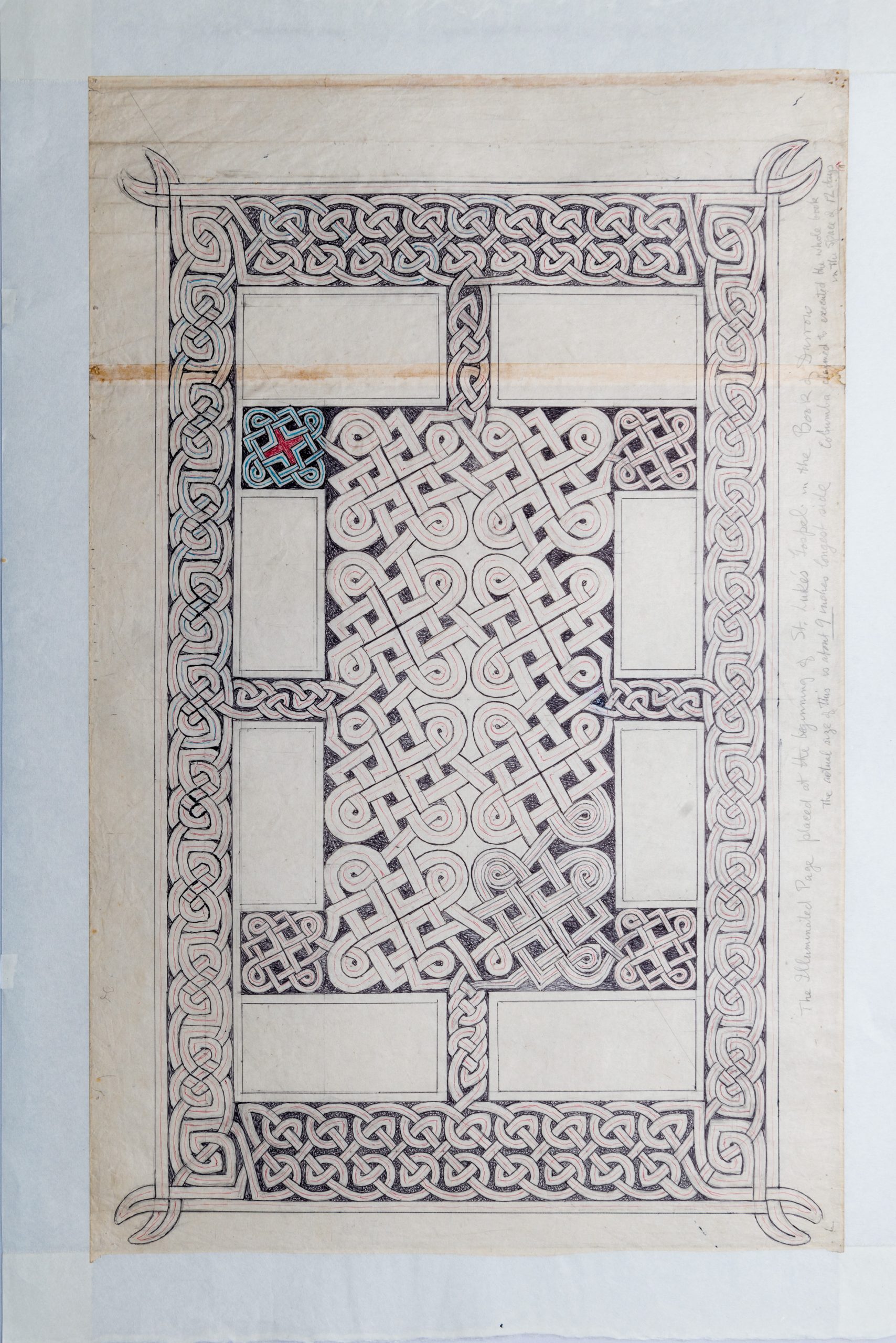 This large drawing is one of Bain’s numerous posters, produced as teaching or lecture aids. It focuses on the various knotwork panels of a page in the Book of Durrow. Near the top left corner Bain fully colours a small part of the design. By spreading apart the interlaced strands he highlights the saltire cross at the centre of the knotwork motif.

The same knotwork motif is repeated eight times at a larger scale in the centre of the page. Three differently shaped crosses are highlighted in white, one above the other down the middle. They reflect the Christian trinity of God the Father, Son and Holy Ghost.

Bain’s script, along the right side, highlights a link between the Book of Durrow and St Columba. It refers to an inscription on folio 247v, implying that the saint created the book of gospels. Nowadays it is thought that the name of Columba was added much later.

The religious community that held the Book of Durrow at the time must have changed the original text. Presumably it wanted to show a direct link to the greatly revered St Columba. The original word me (referring to the book’s scribe) was scraped or worn away and overwritten with Columba. 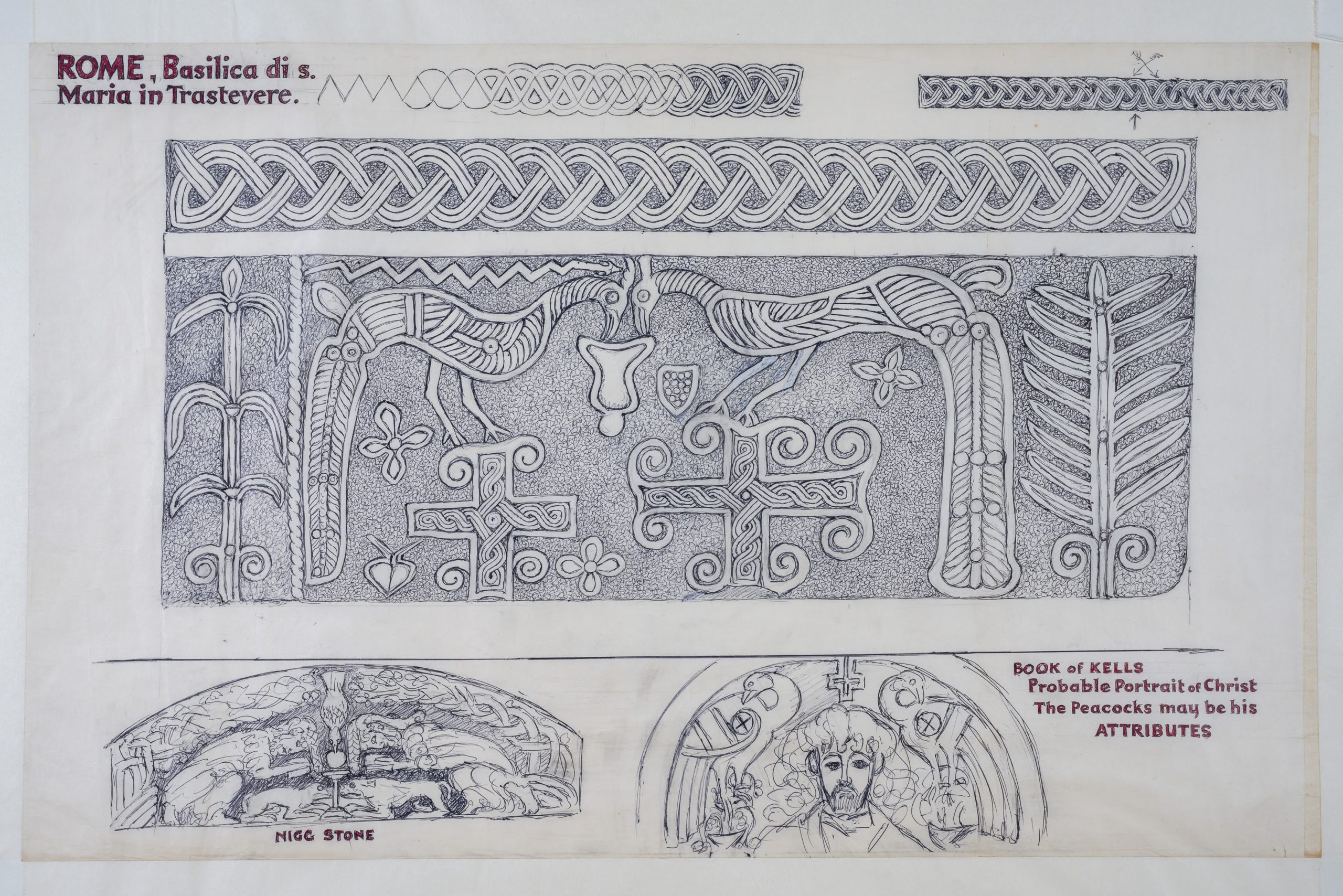 This is something of a puzzle. What are the parallels that George Bain sees in these designs from Rome and the British Isles? There is a simple interlaced border at the top of the main subject but he doesn’t really connect it with the other drawings.

Perhaps Bain is interested in the pair of peacocks facing each other? This is in a mosaic at St Maria in Trastevere, Rome. There is another pair in his extract from a folio in the Book of Kells, although they’re looking backwards. But why does he also draw the two saints and lions from the top of the Nigg cross-slab in Easter Ross?

Nevertheless this another superb example of Bain’s illustrative skills.  It is also one of a small number of drawings that refer to designs from the Roman period. 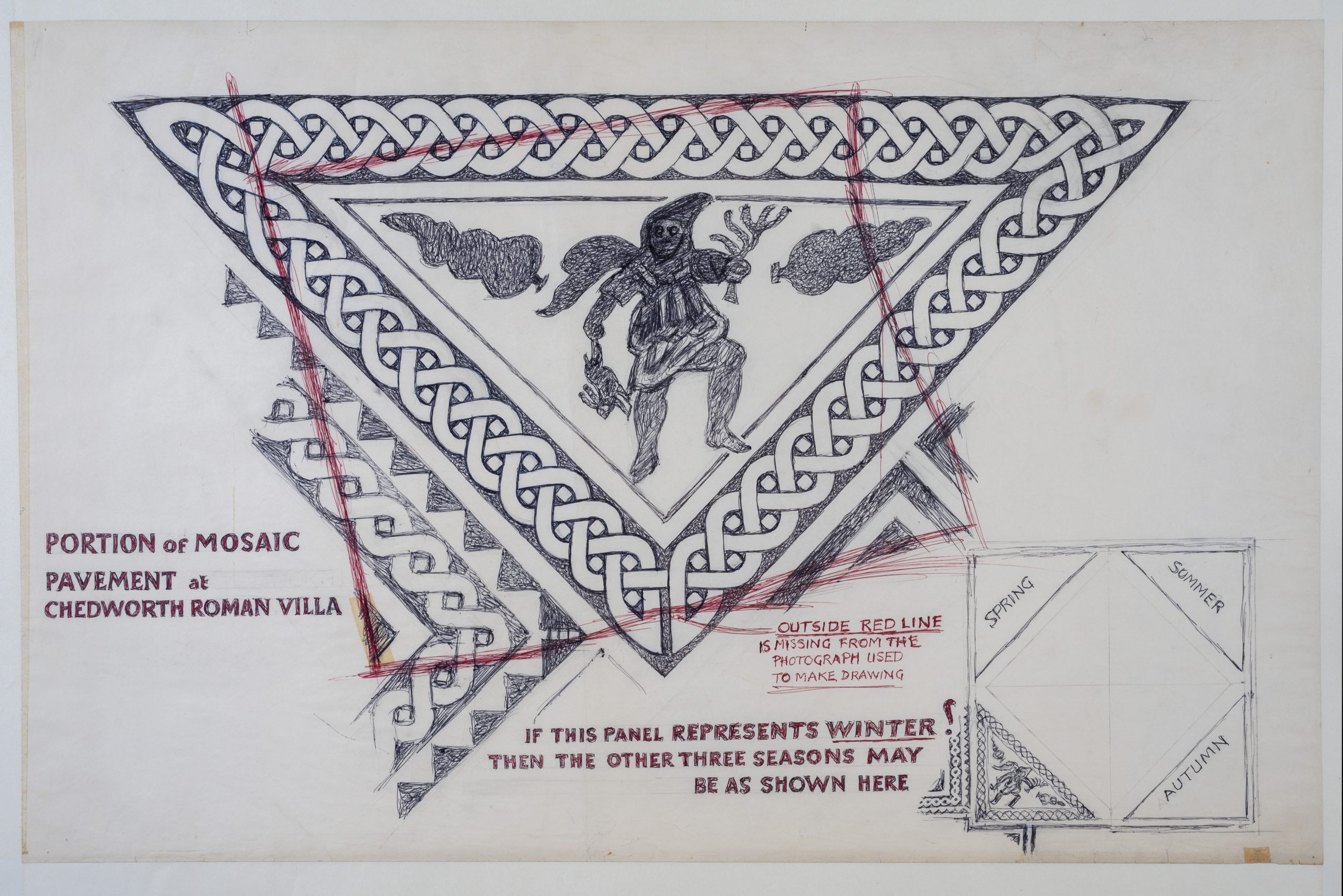 George Bain was extremely interested in the use of continuous line interlace borders. He saw the same design used in Romano-British mosaic floors. So he copied elements of certain mosaics into several of his teaching aids.

This example is from part of a mosaic at the Chedworth Roman villa in Gloucestershire. The border around ‘Winter’ uses a single continuous line. He explains the technique for achieving this in a four sided interlace border on another poster. The principle is based on having an odd number spacing on just one side of the design. But he doesn’t give the specific solution for creating triangular shapes.

This huge drawing of the front of the Nigg Pictish cross-slab by George Bain is a magnificent artwork. But what is not clear is his purpose in creating it. We don’t think he used it as a teaching aid. Perhaps Bain was spurred on by a 1944 publication that included drawings of the stone. He certainly notes that there are errors in them and in other illustrators’ work. Perhaps he was trying his hand at correcting their errors.

Even so, Bain hasn’t created a wholly accurate record of the cross-slab. Instead, we think he also wanted to illustrate the design of the stone so that he could attempt to predict what was on its missing parts. His notes in the margin show he was very happy to have come up with a solution based on a continuous line.

See: Diack, FC ‘The inscriptions of Pictland. An essay on the sculptured and inscribed stones of the North-East and North of Scotland’ edited by Alexander, WM & Macdonald J in Third Spalding Club, vol 13 (1944) and
Petley C 1857 ‘A short account of some carved stones in Ross-shire’ in Archaeologica Scotica vol 4 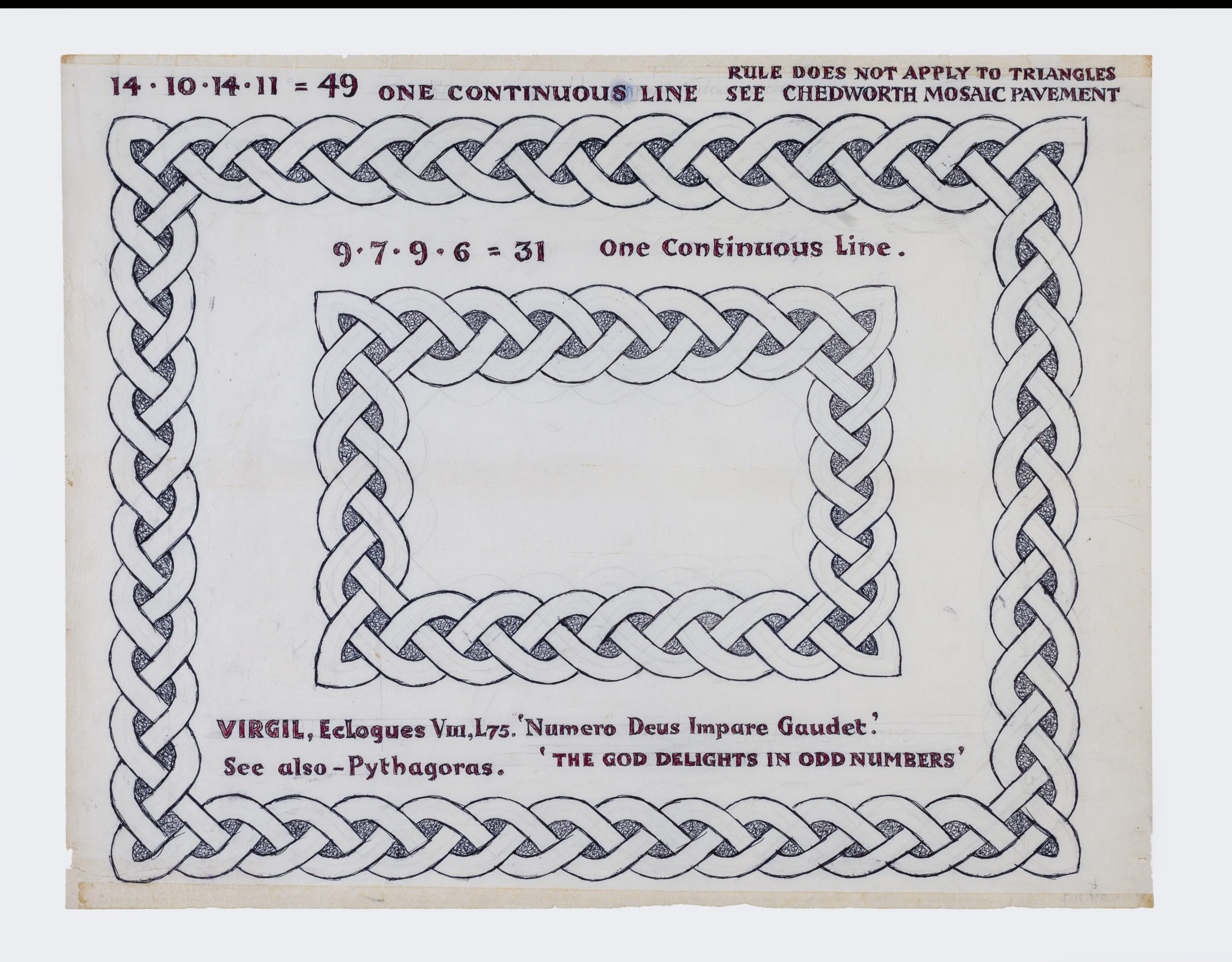 George Bain recognised the importance of the single, continuous strand in borders and panels. He works out how to create this effect by applying ‘odd number’ spacing to just one side of a design. Here he shows two examples. Both are based on an interlace border on a mosaic at the Chedworth Roman villa, Gloucestershire.

Bain felt that Pictish artists and designers used the continuous line to symbolise eternity. This is a fundamental belief in Christian and other religions. In this drawing he links the interlaced line with pre-Christian philosophies. Here, he quotes the classical writers Virgil and Pythagoras to support his theory. 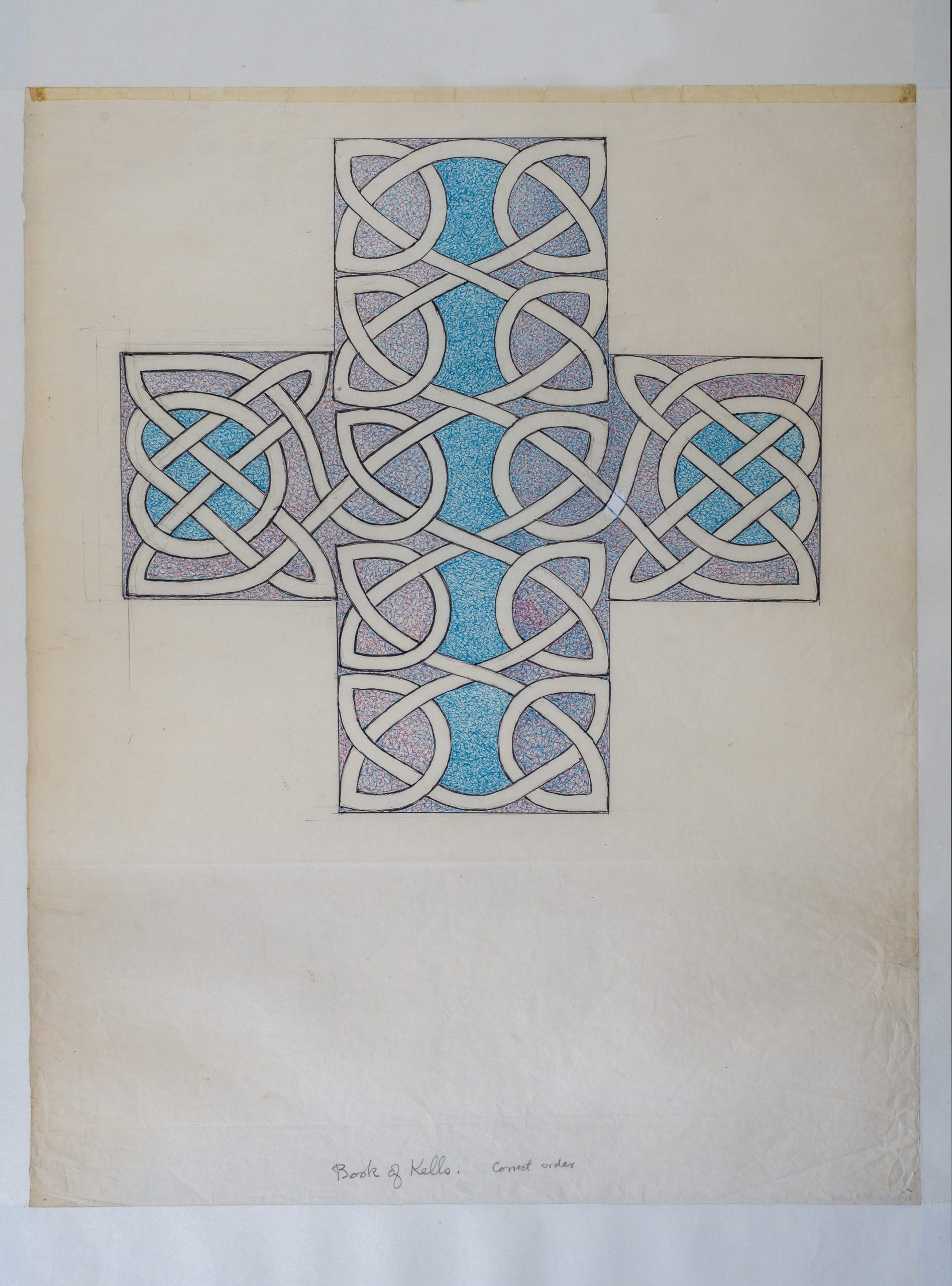 At first glance this is copied from the portrait page of St John’s Gospel in the Book of Kells. The cross is centre-left in the frame around the evangelist. Looking closely at a photo of folio 291v you will see three different designs within the four crosses on the page. Those top and bottom are the same, with four sets of vertical knots. Those to the left and right have five knot sets, but they flow in different directions across the arms of the cross.

Bain’s drawing is very easy to read. It is this simplicity that helps us to understand why he gives it the title ‘Correct order’. He has corrected the scribe’s original design to make it perfectly symmetrical. But even Bain has made a mistake with the altered knot. He has had to use white correction fluid on it. 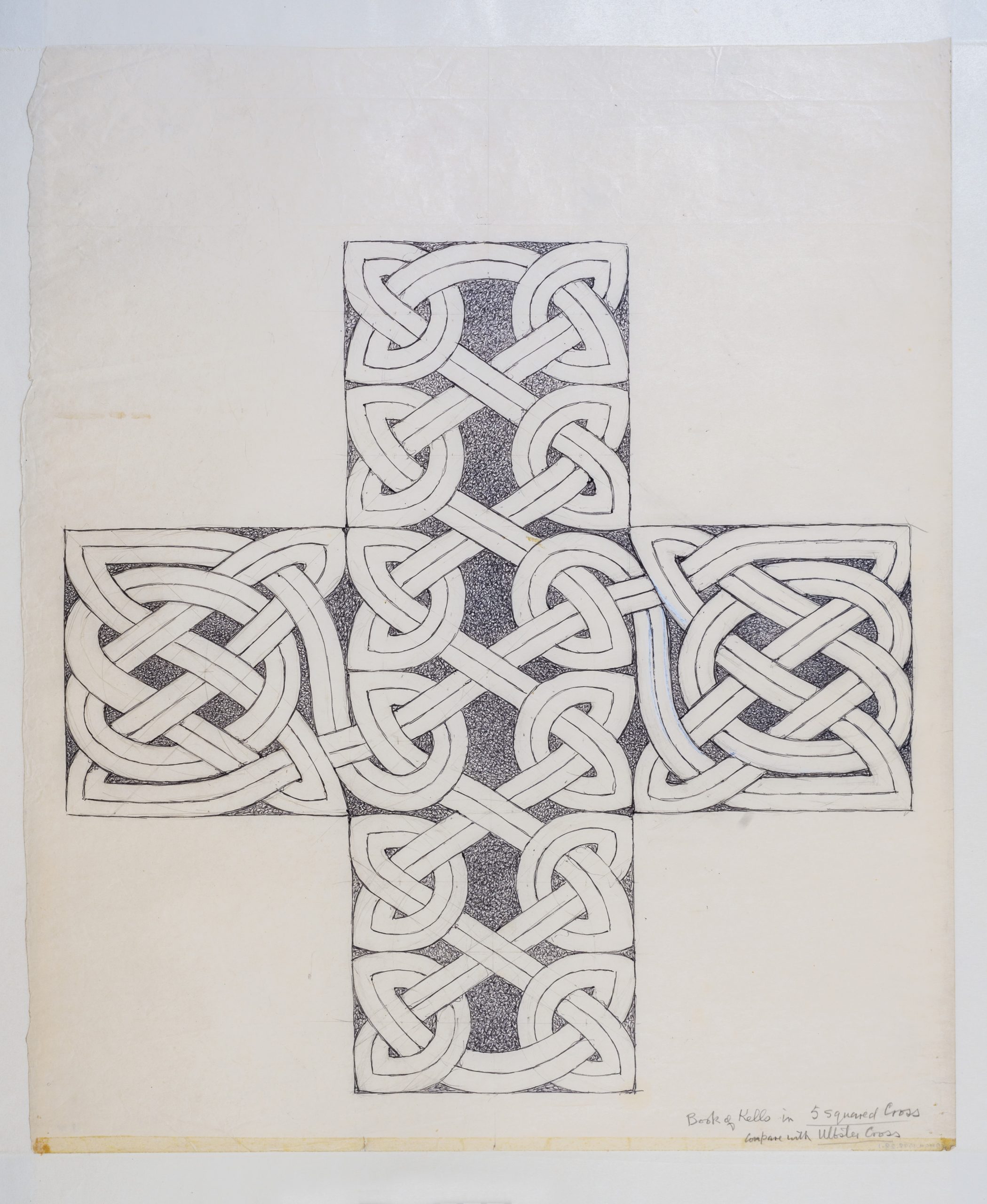 Bain was clearly fascinated by the designs within the four crosses around St John in the Book of Kells. He records how to draw the pattern in the centre-left cross in Methods of Construction. He then ‘corrects’ the design in the other poster in this set. But in this drawing Bain takes the original design one step further.

He adds in an extra set of loops in the knotwork strands forming the cross shaft. This gives the cross the appearance of being made up of five linked squares. The note at the bottom ‘compare with Ulbster Cross’ explains why he made the adaptation. The cross he is referring to is also made up of five knotworked squares. It must have been the inspiration for the re-working of this one from the Book of Kells.