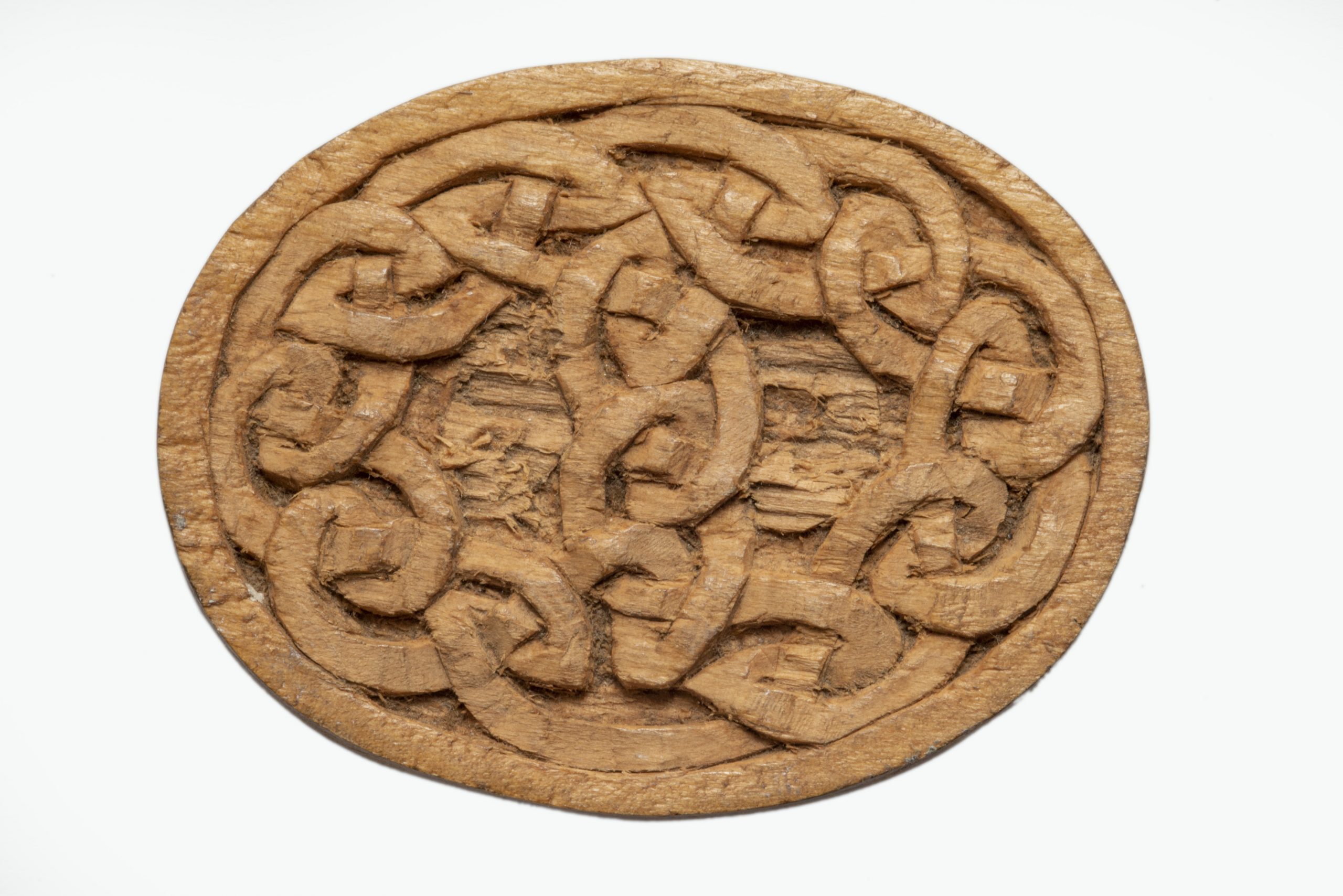 This looks rather like a work in progress or an experimental piece. It doesn’t seem to be quite finished. The design is quite complex for such a small carving and must have been difficult to produce. It’s fascinating working out how two apparent circles have been linked to make the oval shape.

It’s a shame that we don’t know who created the plaque, or when. Perhaps it was one of Bain’s school pupils, or a member of his family. 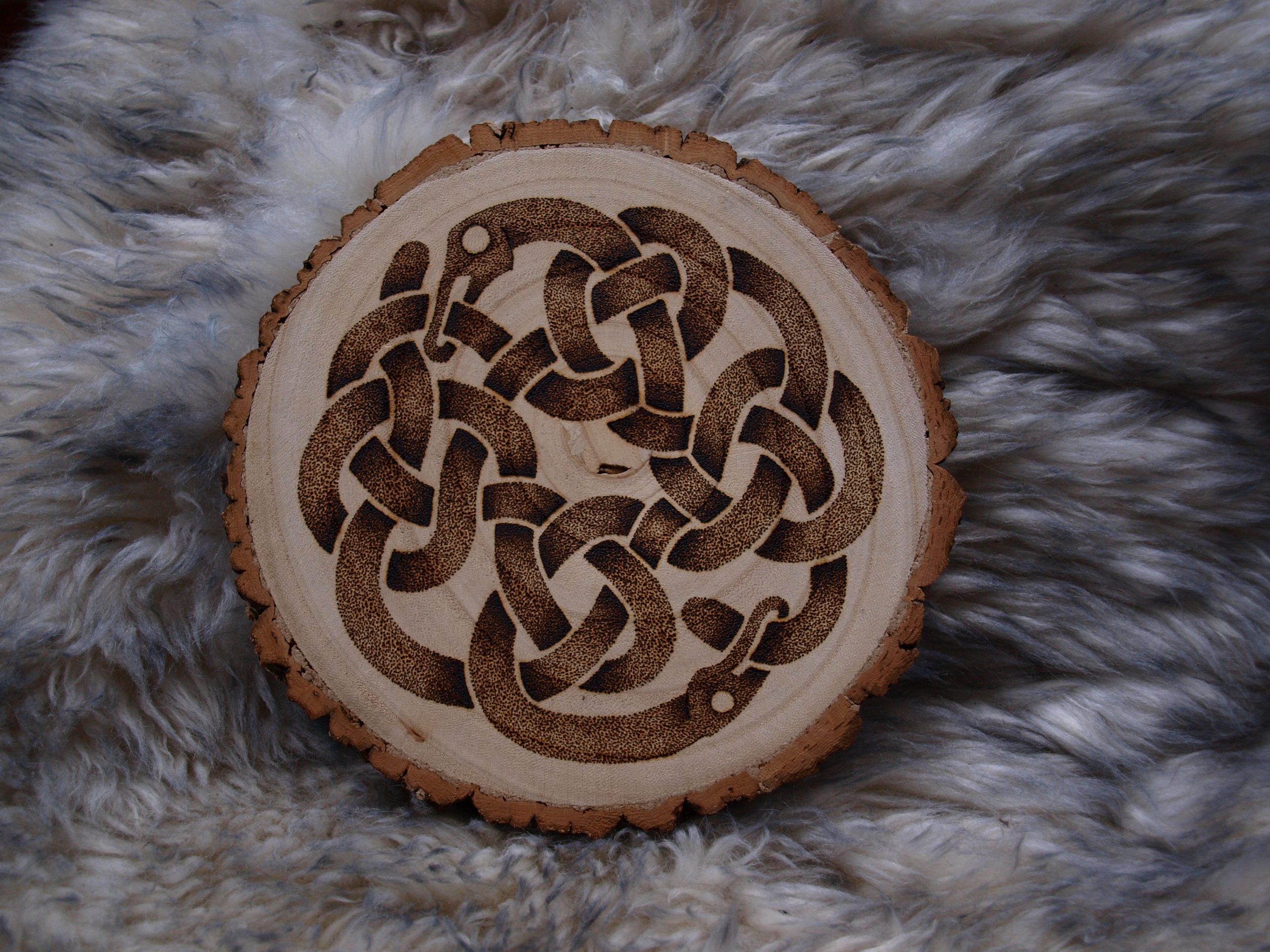 This piece is hand-pyrographed on a wood slice in the dotwork (pointillism) style and is taken directly from the central circular panel of the Sutton Hoo buckle form the early 7th century. It depicts two intertwined serpents biting the others’ tail. 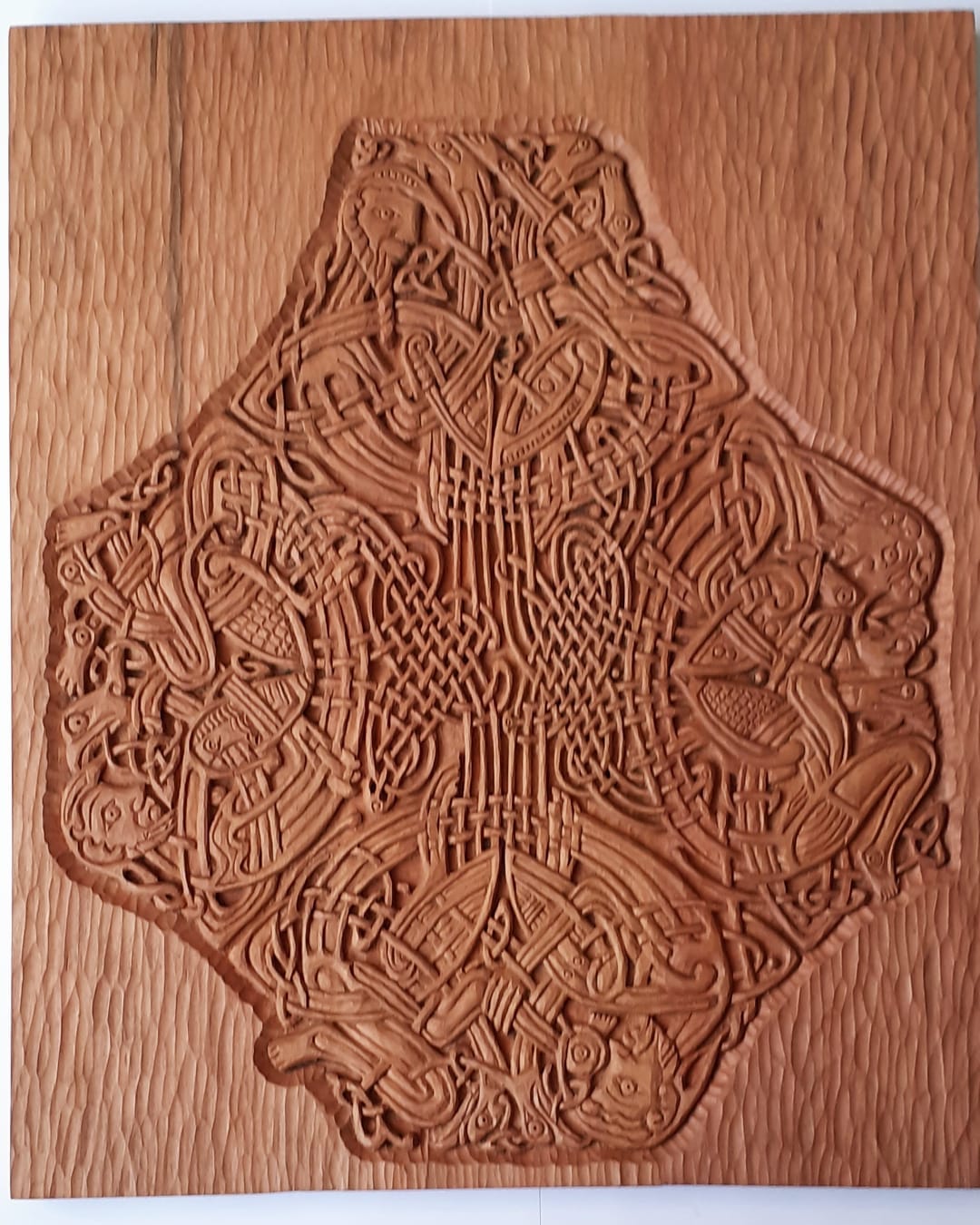 From the Book of Kells, hand-carved in wood. George Bain illustrates this in his book Celtic Art, Methods of Construction on page 104. He notes that the early medieval scribe drew the original  with a maximum dimension of only 3.7cm. 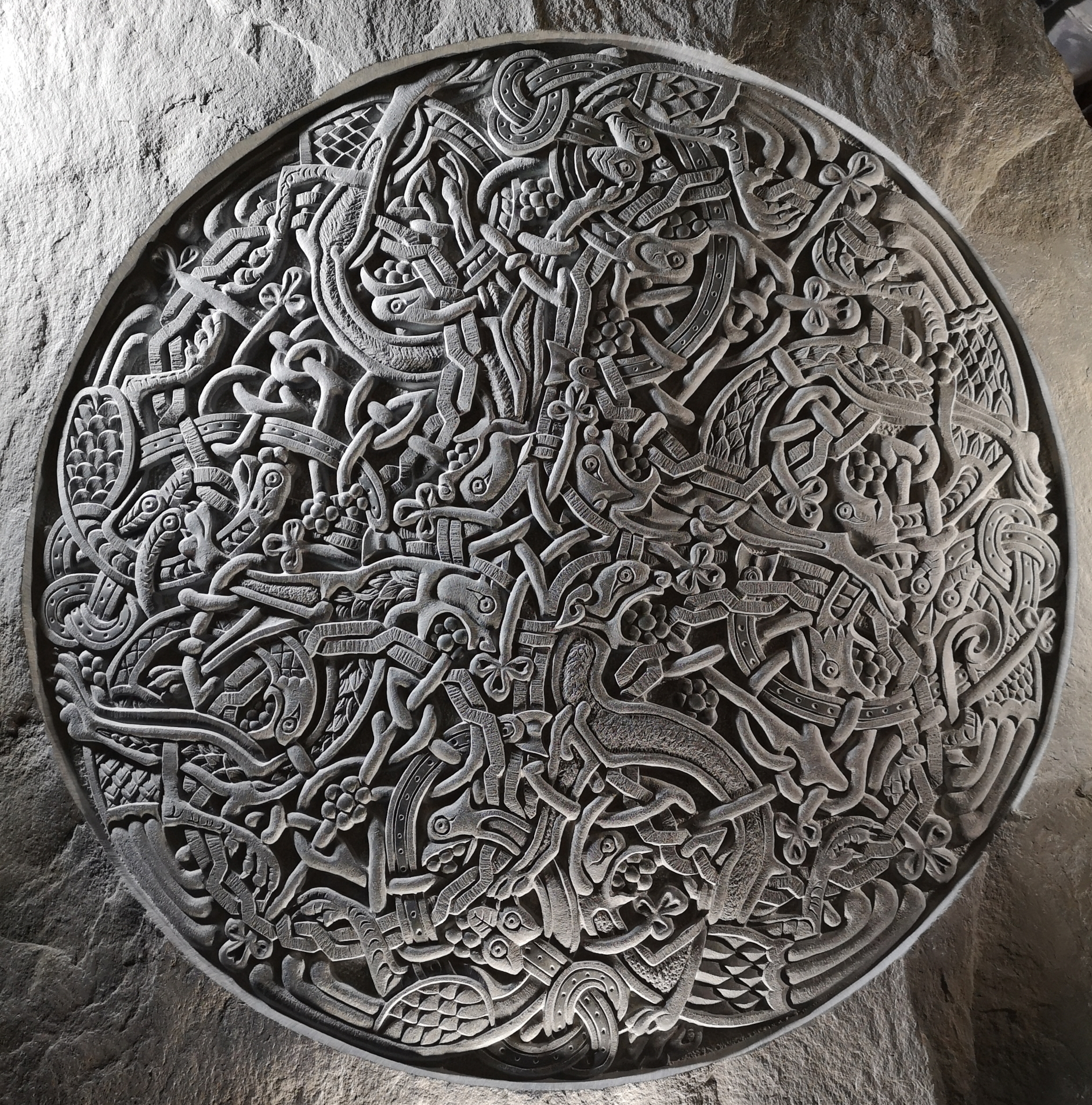 Hand carved in Cumbrian green slate. Based upon George Bain’s drawing of a particularly detailed design from St Luke’s Gospel in the Book of Kells. 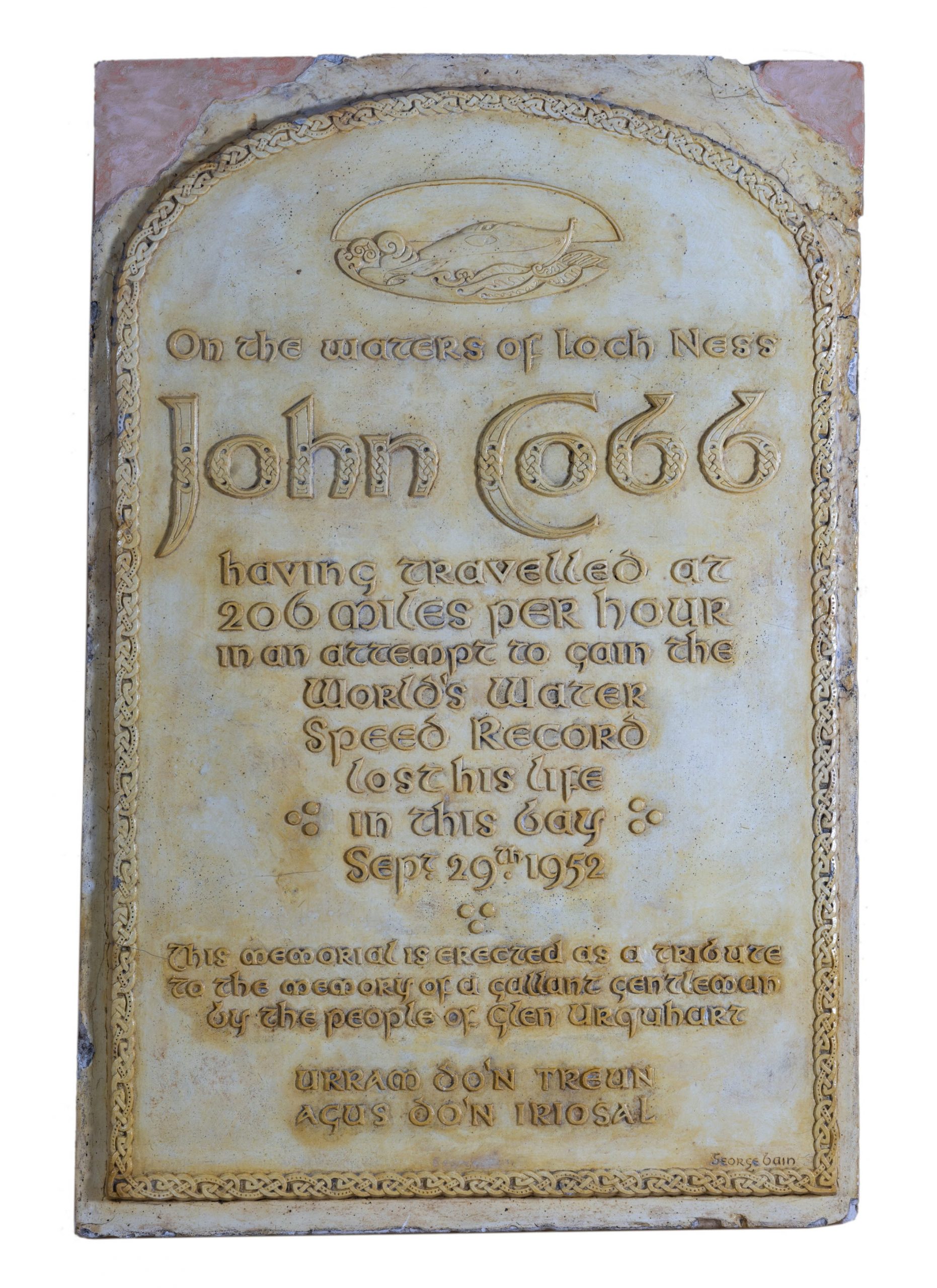 John Cobb tried to set a new world water speed record at Loch Ness on September 29th 1952. Many from Drumnadrochit and the area gathered to watch from Urquhart Castle and other places above the shore of the loch. Unfortuately he died in the attempt, after reaching speeds of up to 206 mph.

The people of Glen Urquhart and Drumnadrochit organised for a memorial to be set up to Cobb. George Bain designed the cast metal plaque that was fixed to a large cairn at Lennie, just a mile south of the castle. It was unveiled a year to the day after Cobb’s death.

This is the plaster cast for that plaque, with a fine knotwork border and unusual lettering. The shapes of the letters are similar to those in illuminated manuscripts, like the early medieval Book of Durrow. John Cobb’s name is more ornate, with letters that are decorated.