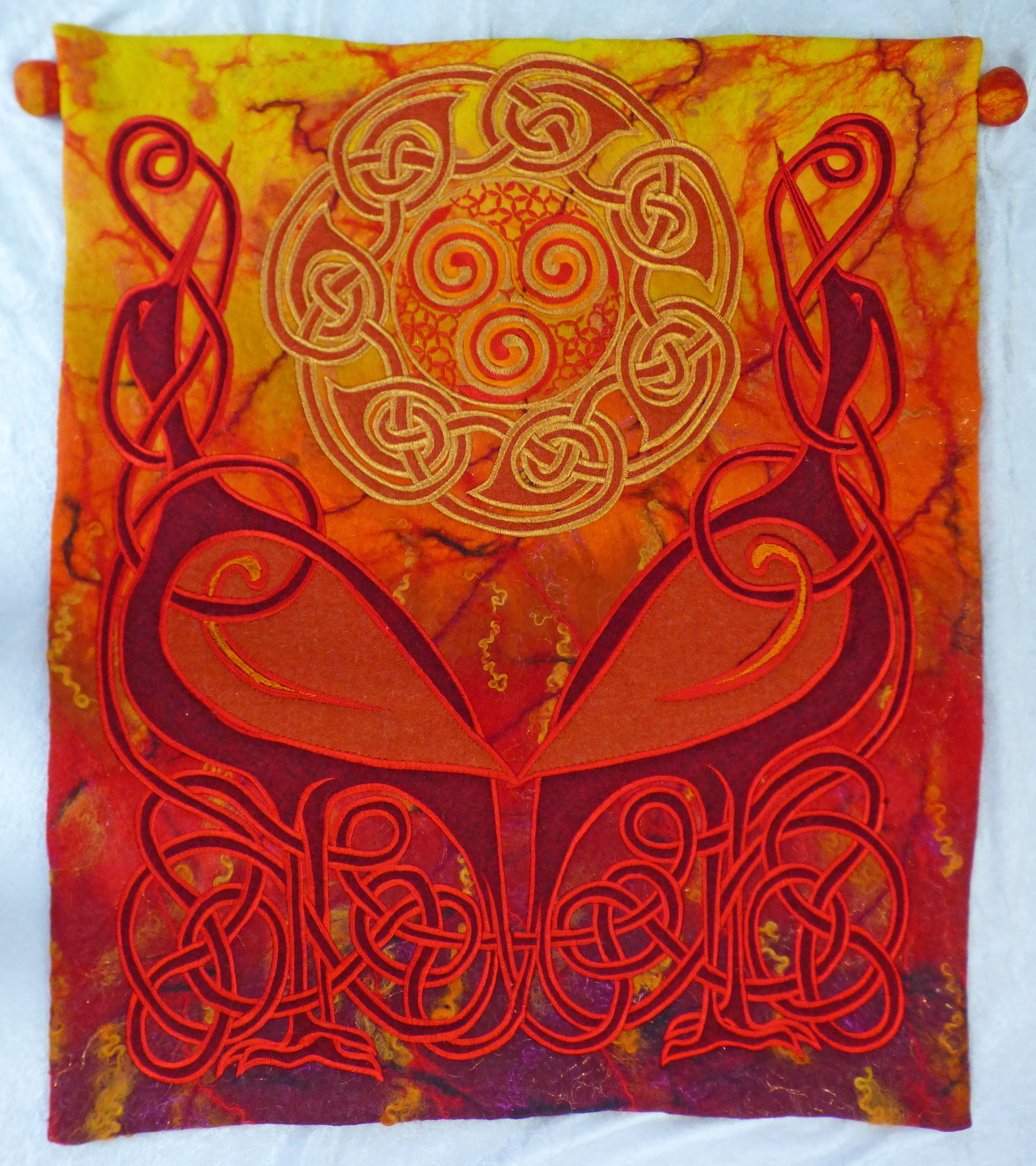 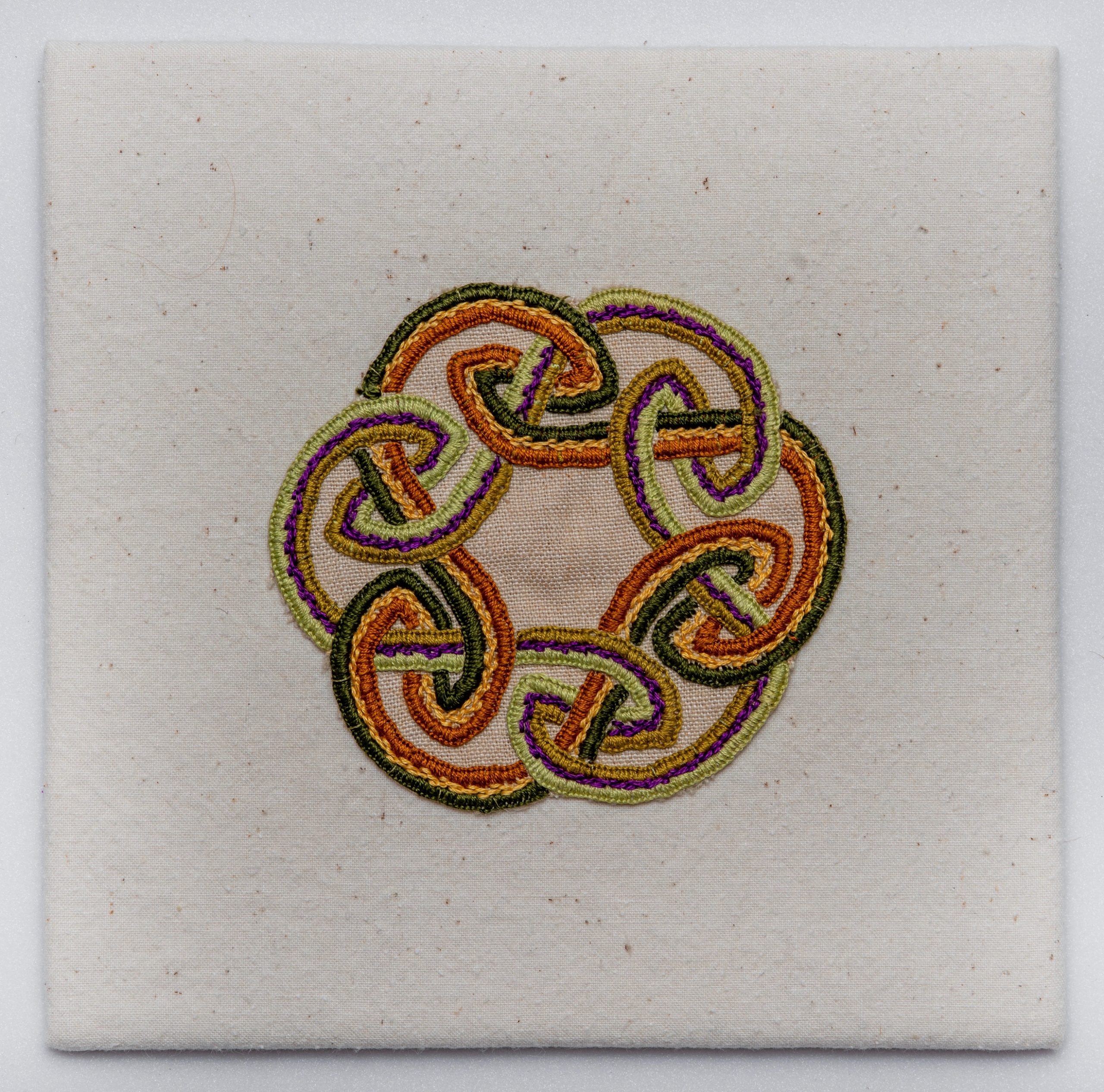 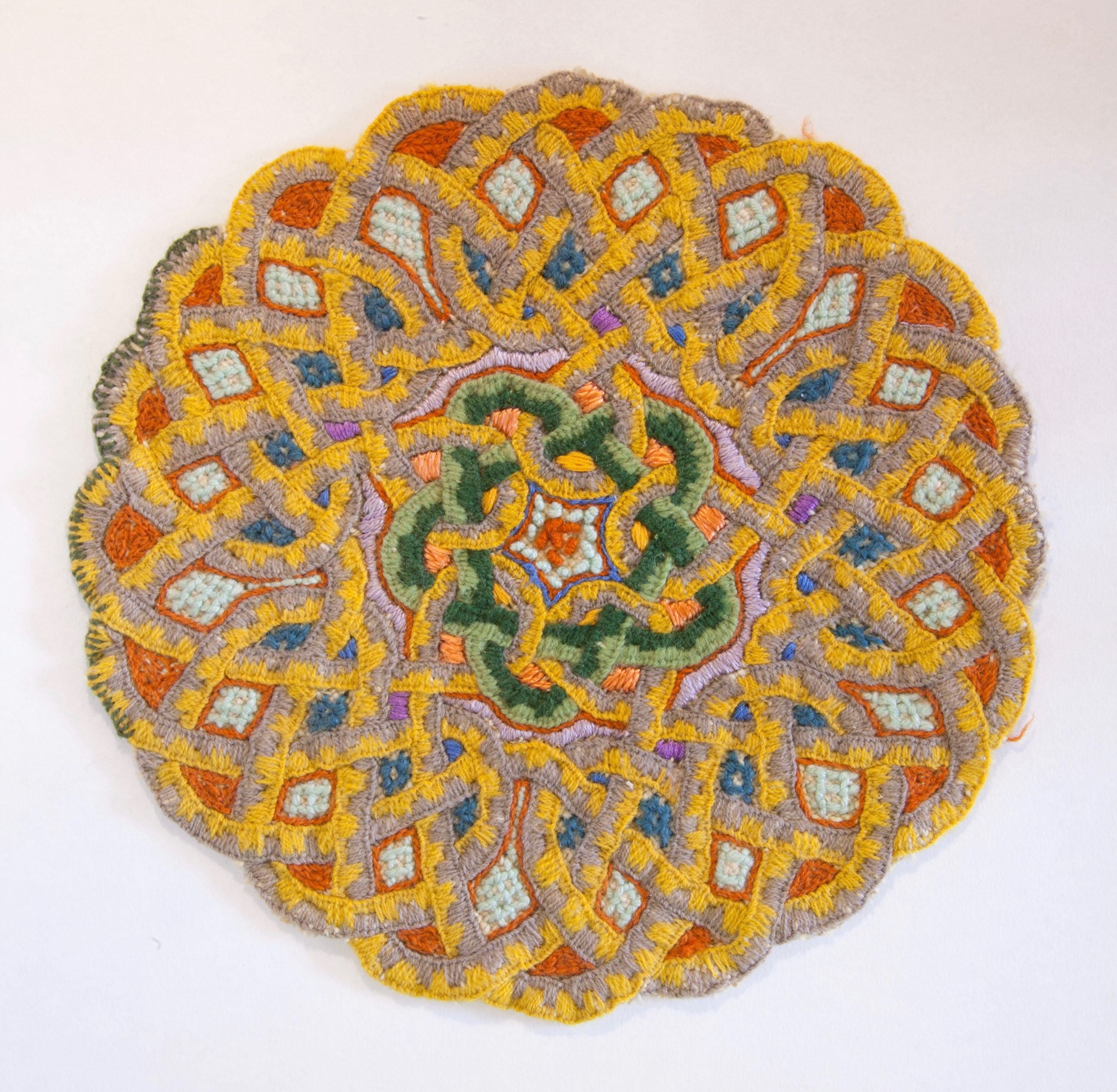 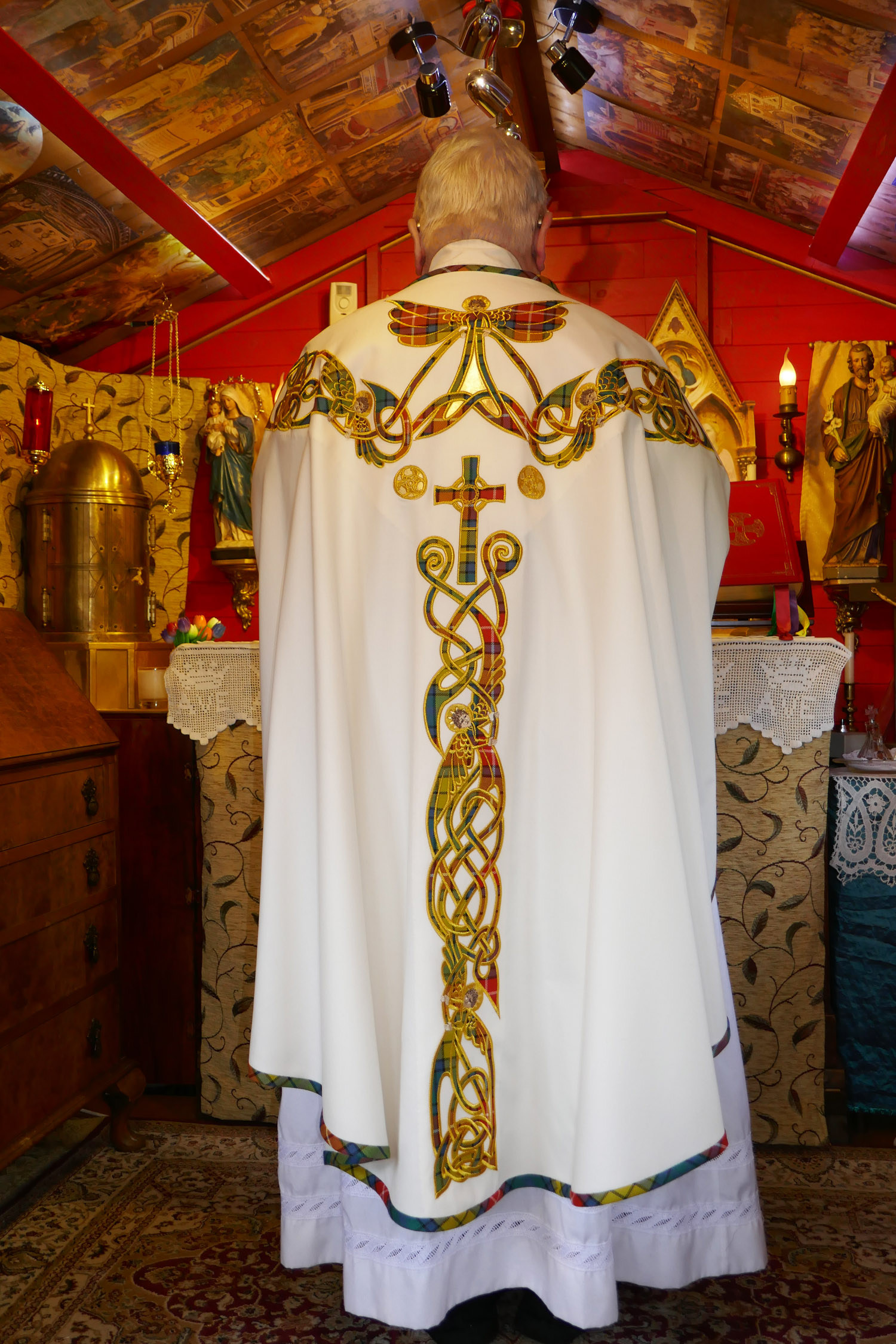 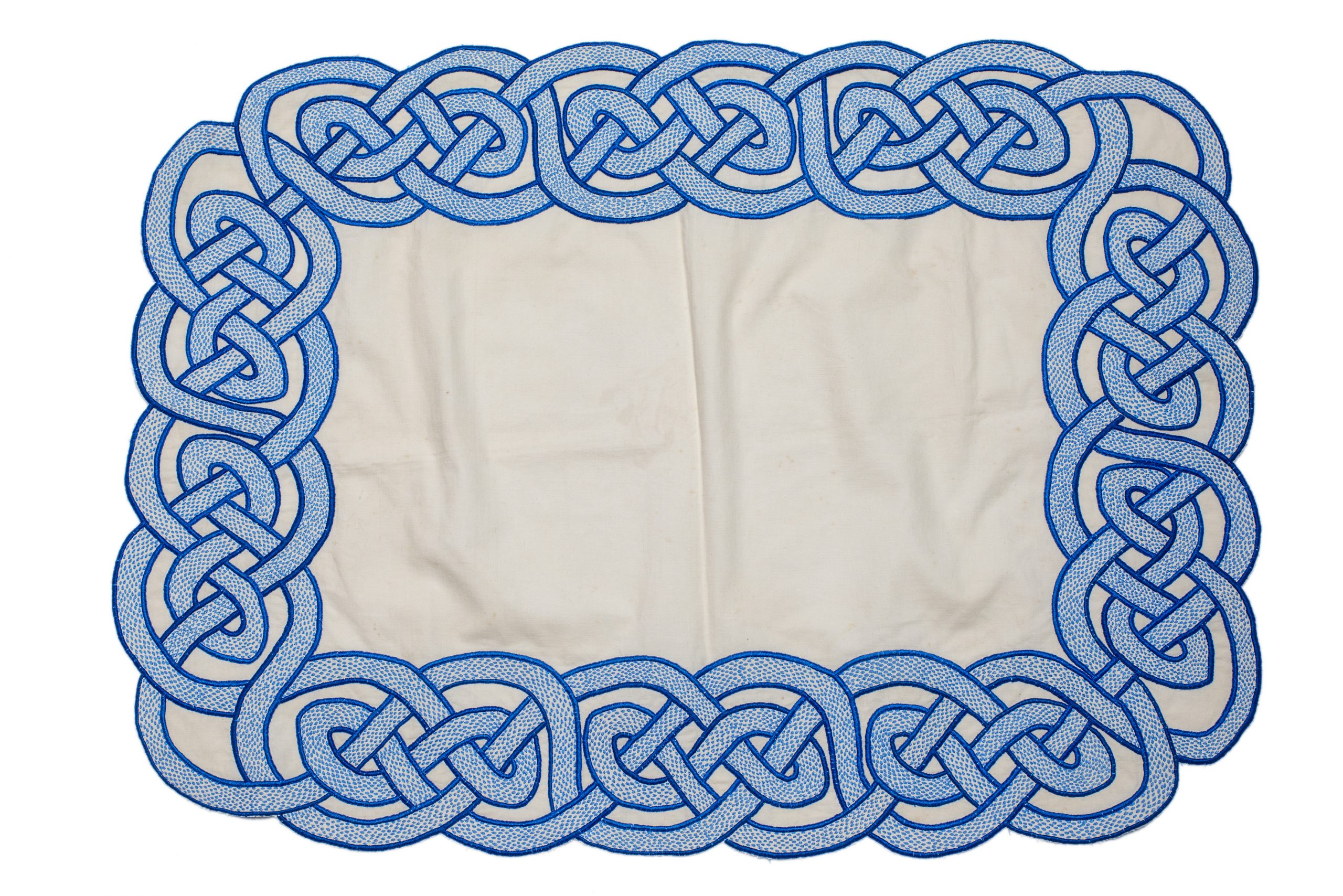 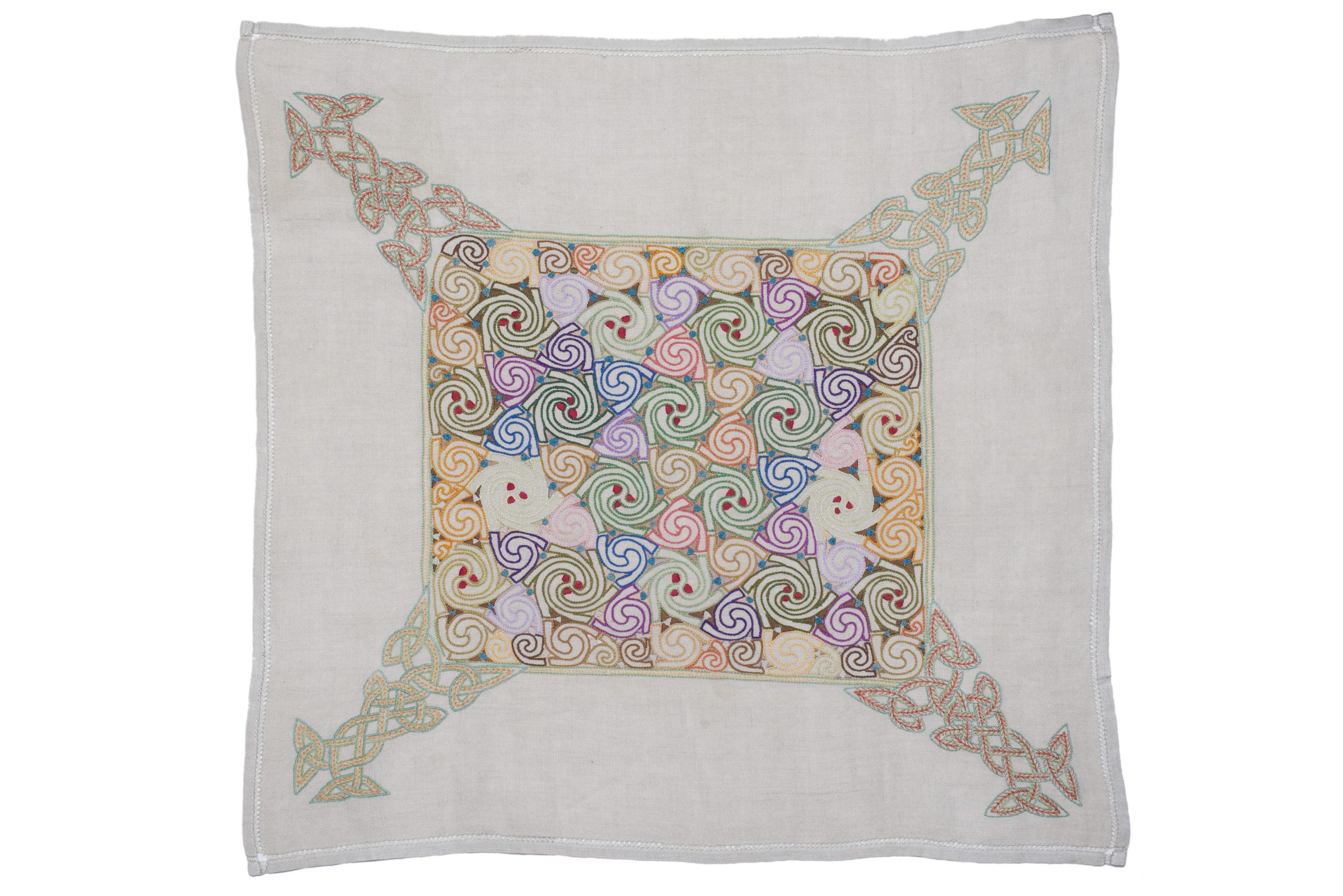 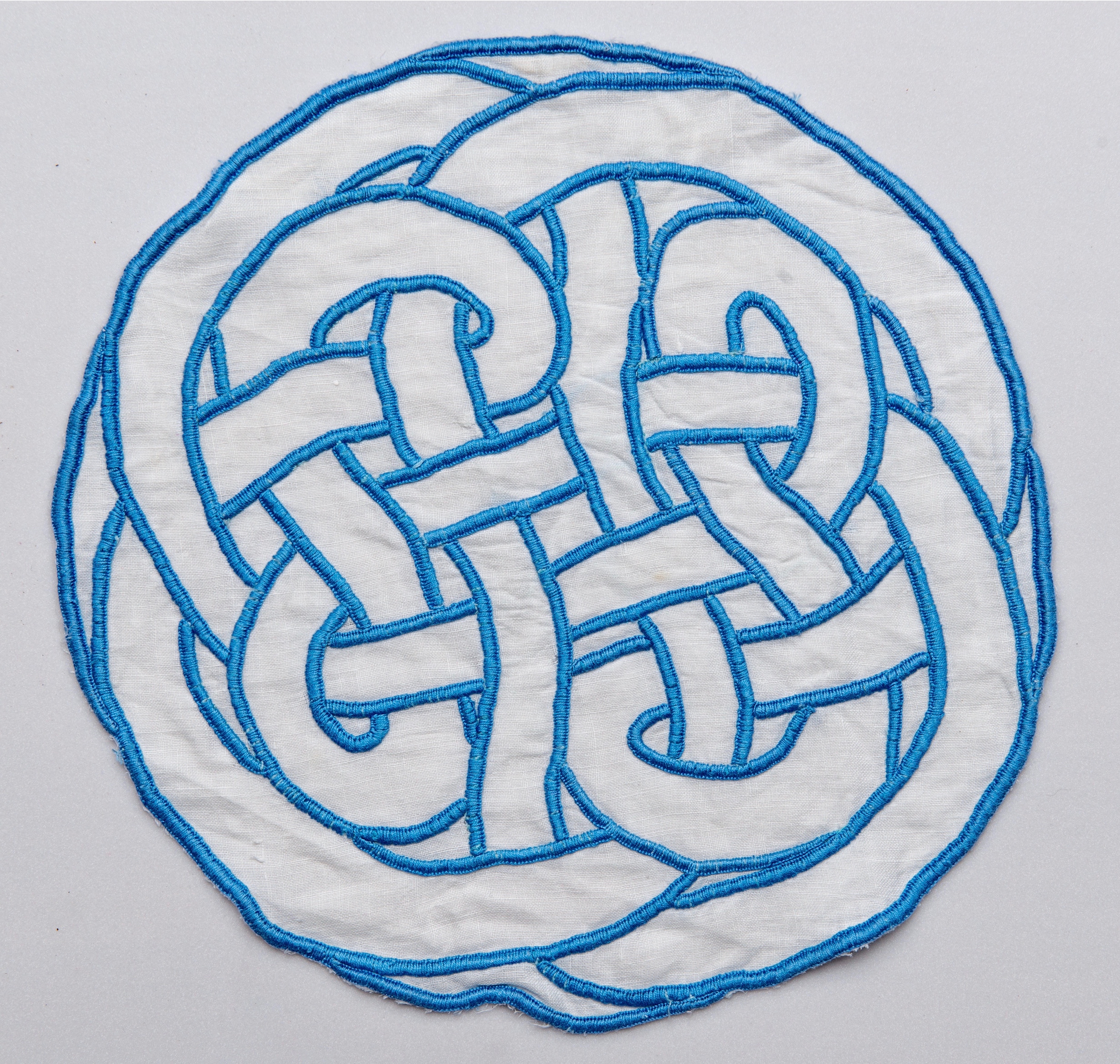 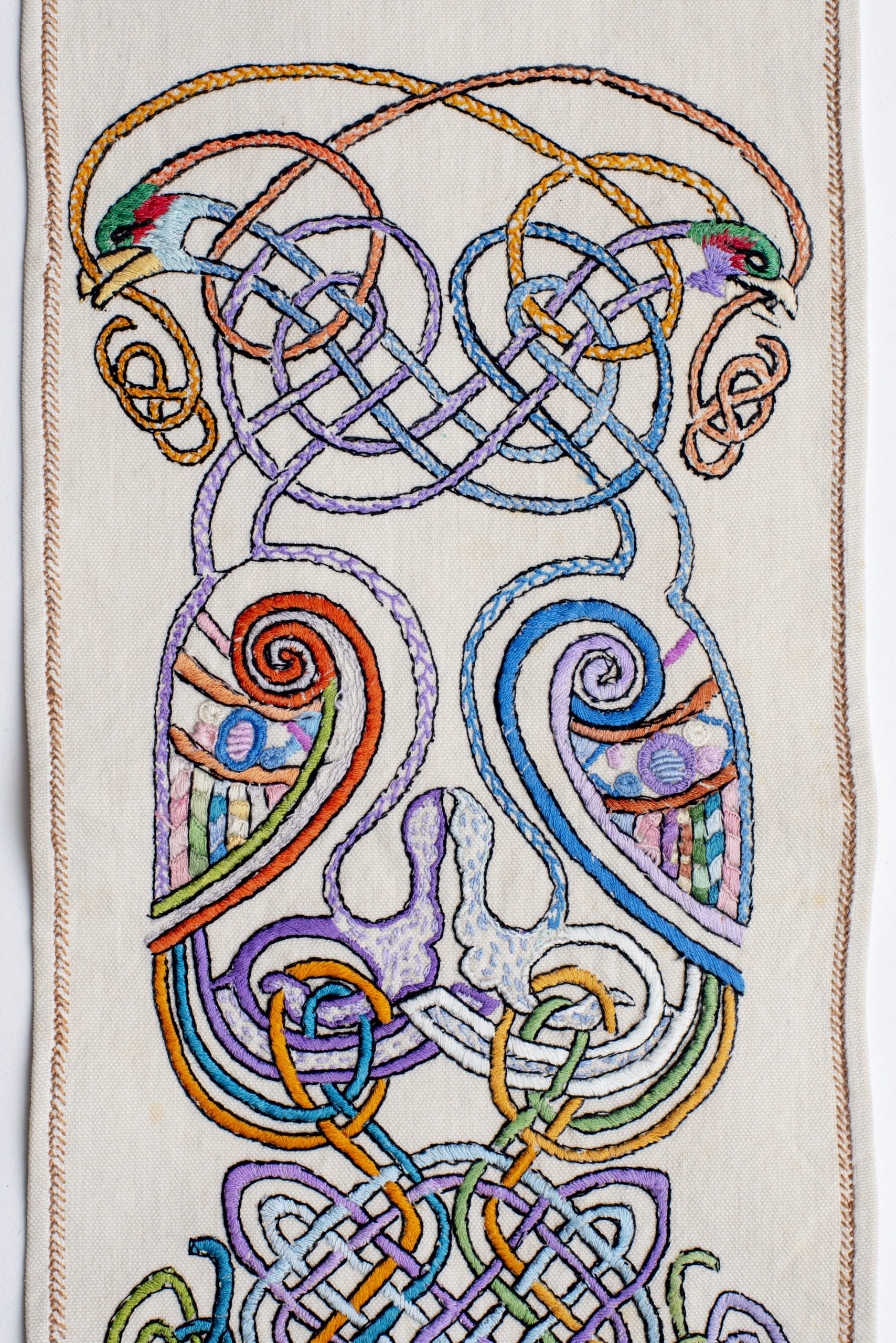 This long, narrow embroidery really is stunning. At more than 1m long it could either be a wall hanging or a table runner. It consists of two pairs of birds, one at each end of the cloth, connected by series of five complex knotwork shapes. The tail feathers interlace with other, separate, coloured strands, finally linking the birds together.

The tail feathers are elements of elaborately stylised and decorated birds with entwined necks. Each has an elongated crest feather of gold wrapped around the two necks and then held in the other’s beak.

The strands that form the birds are worked in satin stitch and feather stitch. Other parts of the design use fly stitch and french knots. Every element is outlined in black, as if the design was a drawing. But the embroiderer has cleverly used shades of different colours to produce an almost  painted effect.

George Bain, his daughter Claire, or one of his students, has chosen a large length of fairly coarse, grey-brown linen for this work. In fact, the material is so heavy and dull in colour that we don’t know if it really was intended for a wall hanging. Perhaps each circle was to be cut out once embroidered and used as a placemat.

The prepared designs have been drawn onto the cloth. Three patterns are outlined in pencil, but only one has been started. Two are of the Aberlemno triskeles (three-in-one spirals), carved into the centre of the Pictish cross in the graveyard. The other is of three intertwined birds, their talons interlocked at the middle of the roundel. Each bird has a different design on its wing. They are loosely based on similar examples in the Book of Kells. 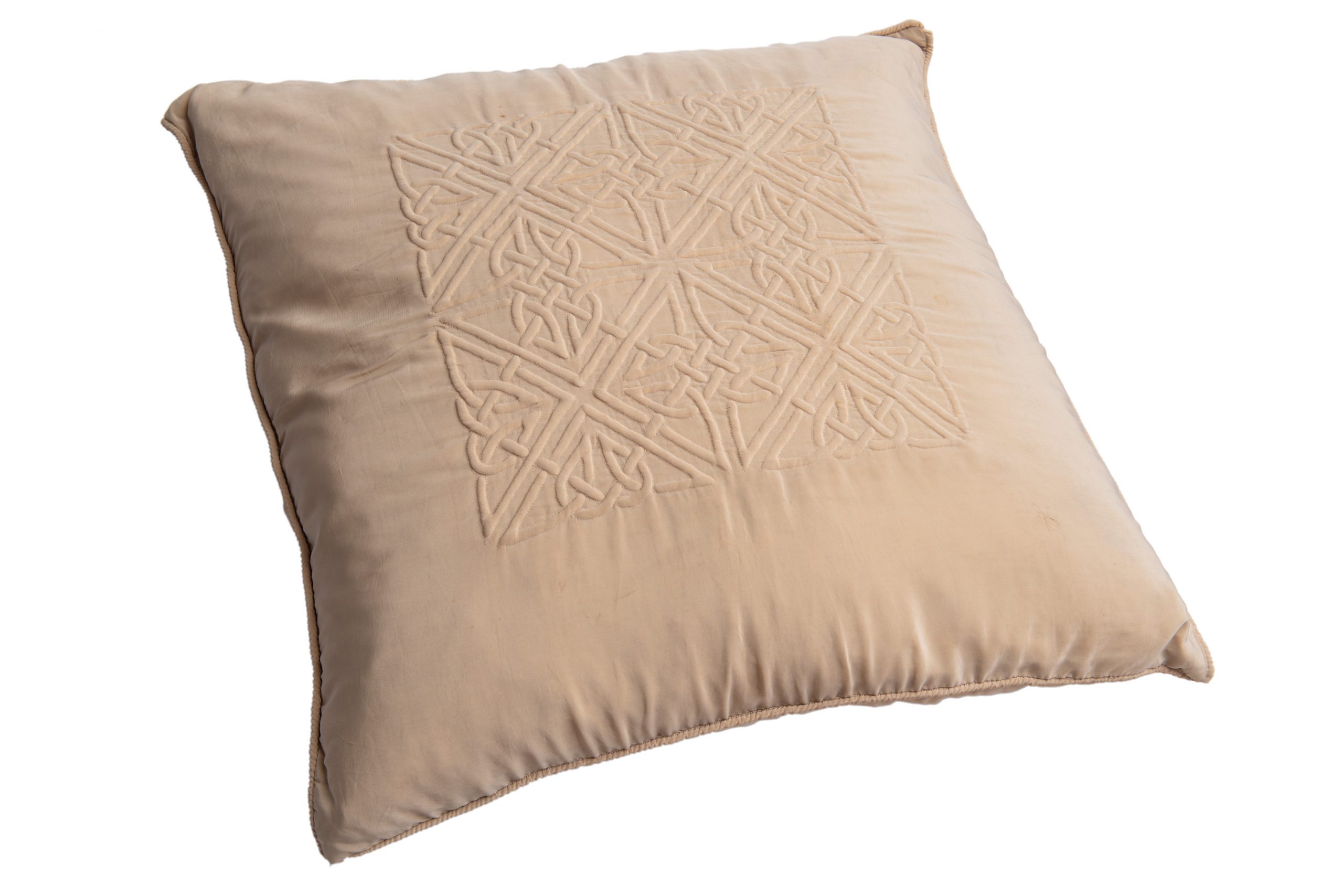 The repeated knotwork motif on this cushion is copied from one on the Pictish Dunfallandy stone, in Perthshire. It’s in the lowest panel of the cross shaft. This is one of many similar knotwork designs that George Bain used in Methods of Construction. They include examples from the cross-slabs at Rosemarkie, Ross-shire, as well as St Vigeans and Meigle in Angus.

Whoever made the cushion has created a sculpted textile of knotwork. The raised design has been worked using a method called Italian (or corded) quilting. Two layers of fabric are used. Parallel lines are stitched through both layers, then cord or wool is threaded between them. It cleverly reflects the three-dimensions of the cross-slabs. 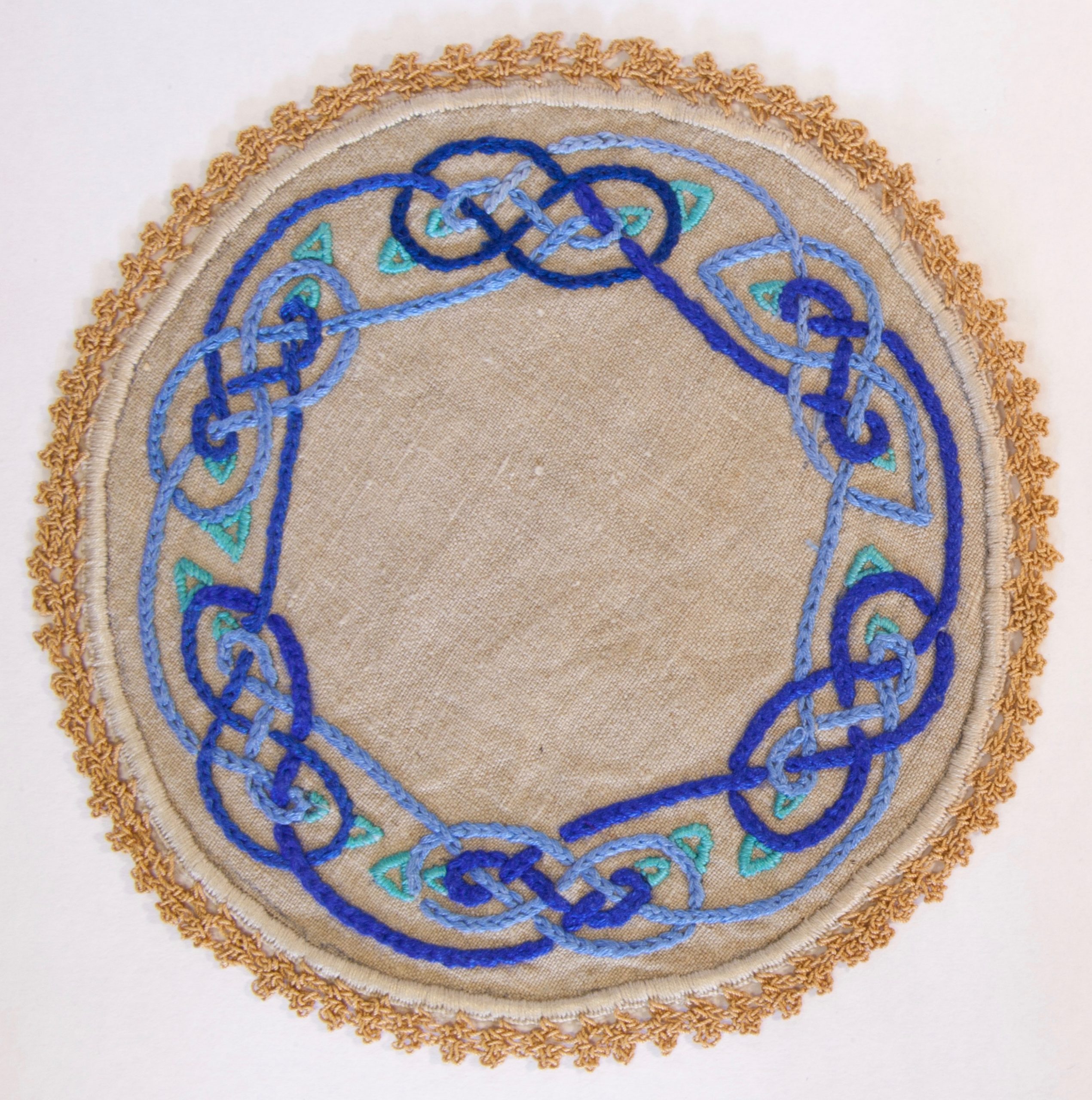 George Bain explored how Celtic interlaced designs on sculpture and other objects could be translated into embroidery. The pattern on this small, circular place mat was created by him. It was transferred onto cloth so that a set of six could be made. We presume they were embroidered by one of his students, either in Kirkcaldy or Glen Urquhart.

Light and dark blue chain stitch forms two endless knotwork strands. Accents are added in turquoise satin stitch. The cloth has then been carefully edged in white blanket stitch. It’s finished with a separate border in fawn, either created using picot stitch or by tatting.

More complex embroideries, sewn by needlework pupils at Kirkcaldy High School, were included in a display at Glasgow’s Empire Exhibition in 1938. As well as sponsoring the Exhibition, J&P Coates Ltd of Paisley organised their own display stands for an International Collection of Embroideries. It included work by the school using Bain’s designs.